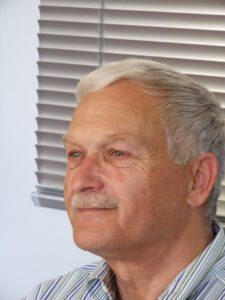 Twenty years ago, Phil Maier took a course in workplace conflict mediation at CJI paid for by his employer. He had no idea what he was getting himself into. Recognizing some natural ability, the CJI trainer encouraged Phil to take a conflict mediator training course. After taking the course, Phil began volunteering at CJI. Before a meeting takes place between people in conflict, mediators meet with the people individually to try and clearly understand what’s going on. Phil says there has to be a willingness in each person to work things out or a mediation will not be successful. Even with careful preparation, there are surprises in each meeting—both parties often withhold at least one critical fact. He tells new mediators, “Be ready for the unexpected.” To effectively help people resolve conflict, Phil says you need to hear what’s being said but also to read body language. A man of faith, before each mediation Phil prays, “I need you to be present. Help me to see that which is not seen. Help me to hear what is not being said. And to understand that which is not understood.” Being sensitive to what is going on below the surface and asking just the right question can be the key that unlocks a conflict. Over the past 15 years, Phil has co-facilitated countless mediations. Each one has been different—requiring nonjudgmental listening and skillful but gentle probing. Phil remembers a father and son who were at odds. The son was rebelling in school. The father wanted the very best for his son and was frustrated by his behaviour. The mediation was going nowhere, until it was revealed that the father had physically punished the son and humiliated him. The only way the son felt he could get back at his dad was to do poorly at school. When they were able to talk about the incident, “the floodgates of reconciliation were opened,”says Phil. Now retired from his management position at Schneiders/Maple Leaf Foods, Phil is continues to facilitate mediations for CJI. He is also active on several other boards and, through the Salvation Army, does mediation in Goderich, where he and his wife retired. Phil believes it’s critical for Canadians to ask themselves, “What do we want to be as a society?” He feels that most of the time we treat the effects of problems rather than addressing the causes. He is proud to be involved with CJI because it’s a unique organization with many “leading edge” services offered in one place. “There is a synergy when you have like-minded people seeing the possibilities,” says Phil. “The model at CJI is fantastic. It would be great if there were satellite operations. The future is in expanding out,” he says. “What is encouraging [about CJI] is that there are people who get it and are passionate about facilitating change in society.”